MOVIE REVIEW: KING OF BOYS Serves Your Money’s worth on a PLATTER 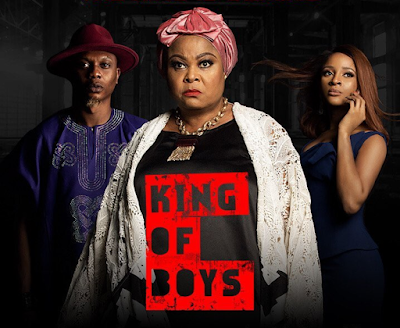 KING OF BOYS tells the story of Alhaja Eniola Salami, a businesswoman and philanthropist with a checkered past and a promising political future. She is a pillar of society- loved by many, feared by most and truly known by a select few. As her political ambitions see her outgrowing the underworld connections responsible for her considerable wealth, she’s drawn into a power struggle that threatens everything she holds dear.

Ladies and gentlemen, permit me to inform you that Kemi Adetiba’s KING OF BOYS is the STEW everyone has been talking about. THE REAL STEW! Apart from being cinema-worthy, this film actually proves that the people who came up with the phrase “NOTHING IS IMPOSSIBLE” knew what they were saying, and the director of KING OF BOYS knew what she was doing when she decided to show us that it is possible to produce a 170 minutes long cinematic experience in a class of its own, with a thought provoking story which leaves you almost speechless, and a stellar cast who gracefully show us Nollywood is indeed not made up of clueless wannabes!

I am an ‘ALARORO’ (prudent spender) so I
get very excited anytime I get my money’s worth. KING OF BOYS gave me my money’s worth with a sprinkle of bonuses here and there. I am pleased to inform you that this film is not just a must-watch but a GAME CHANGER in Nollywood.

You should see for yourself what a MASTERPIECE, KING OF BOYS really is. Lest I forget, watch out for this movie’s breakout star, Reminisce a.k.a Makanaki, a.k.a Akorede . I promise, I never "experred" the ‘show’ he gave.

P.S. No spoilers just because I’m still recovering from the excitement from this movie.