MOVIE REVIEW: MERRY MEN Keeps it as ‘MERRY’ as Possible! 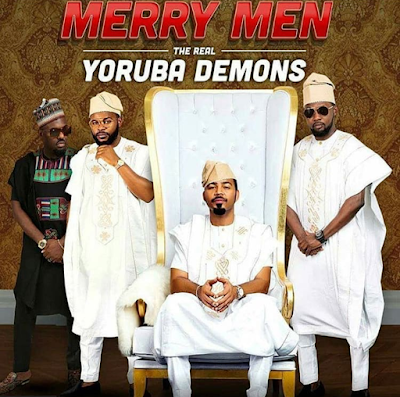 “Merry Men” follows the story of four Abuja big boys, who are considered the city’s most eligible bachelors. They have thriving businesses, palatial homes, fast expensive cars and attention of women in no short supply. They are known as the “Merry Men” even though the ladies would prefer calling them Yoruba demons.

First off, ‘Merry Men’ is such an enjoyable and relatable movie you can’t help but love! This film scores more points than it loses because it delivers exactly what it promises. Taking the ‘Robin Hood’ background of the story into consideration, the theme is easy to comprehend and the characters, quite believable. I was particularly impressed by the synergy displayed by the quartet of Ramsey Nouah (Ayo Aleshinloye), Falz (Remi Martins), Jim Iyke (Naz Okigbo), and AY (Amaju Abioritsegbemi). They made acting seem the easiest thing ever!

As always, there won’t be any form of bias here; I’ll inform you that I noticed some not so palatable elements, chief of which were the ‘fight scenes’ which looked like some form of "abracadabra". What were they thinking? Who muddles up fight scenes like that in the year 2018? I just couldn’t deal with those scenes, especially the one with ‘Naz’ fighting some guys like a robot. Excuse me! Really? There were also some
rushed and quite confusing scenes which I totally forgive because the end ‘kinda’ justified the means.