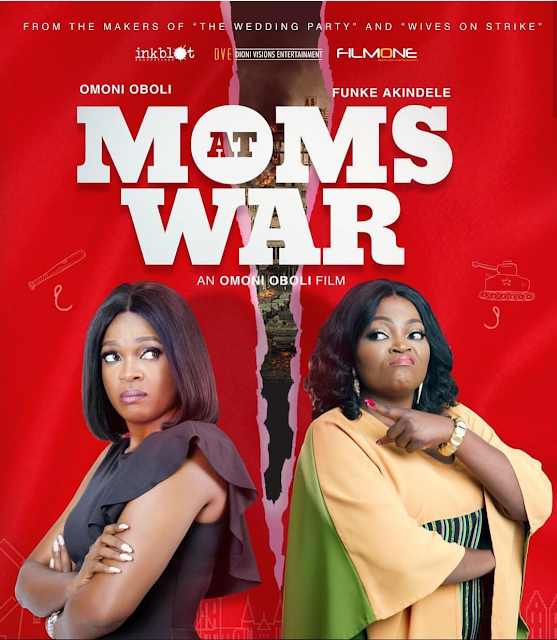 MOMS AT WAR has simply come to school us all on what a cinema- worthy movie ought to look like! Before anything else, let me give you a synopsis of this great film.

Moms At War tells the story of Olaide and Ebubechukwu, two mothers who would do anything for their children. Omoni Oboli stars as Ebubechukwu, a posh career woman who was born with a silver spoon and expects her only daughter to follow in her footsteps. Funke Akindele stars as Olaide, a self made woman who built herself up from nothing to raise her son and give him the life she did not have. With their children competing for a place in a prestigious scholars program, everything starts to derail as the mothers go head to head to ensure that their individual child wins.

First off, this movie is in a class of its own “patapata”. It isn’t of the same category as all the ‘jagbajantis’ that have been served to us as comedy in recent times. The story is quite unique and very unpredictable, continuity was on point, costuming, very commendable, and the characters were more than believable.

To be honest, MOMS AT WAR was so good, I forgot to look out for errors. I still can’t point out any error. Not one! I am usually quick to pick out errors while watching films, but this one “pass me”.

If at this point, you are still expecting me to share spoilers from this movie, you are on a long thing. MOMS AT WAR is that one movie which gets an A1 from me. Unbelievable right? I could watch this film 100 times and not get bored at all. This has little or nothing to do with the hype around it, but the
pride and satisfaction which comes with watching a proudly Nigerian film that is world-class.

GOD bless Omoni Oboli and the rest of the crew. I am so proud to be Nigerian!