MOVIE REVIEW: Paula Patton’s Pulse-pounding Performance in 'TRAFFIK' Reminds Us Why We Adore Her! 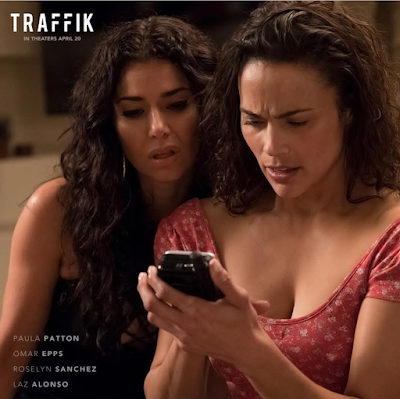 TRAFFIK is one movie we won’t forget in a long time because it leaves us cinematically satisfied. What a movie!

The film is about a couple on a romantic weekend in the mountains accosted by a biker gang. Brea played by Paula Patton and John, played by Omar Epps defend themselves against the gang who will stop at nothing to protect their secrets.

TRAFFIK is super intense and literally shows us what a thriller should be. It entertains us just as much as it enlightens us about sex trafficking in the world. It is my kind of movie because it leaves me intellectually curious and I was truly fulfilled by the time it ended.

I was particularly impressed with the camera work by Dante Spinotti, and stellar performance from the duo of Paula Patton and Omar Epps who were the lead characters.  They were absolutely phenomenal. I’m a huge fan of Paula so I went to see the film with very high expectations, and boy was it worth it! She was a delight to watch as it was obvious she had mastered her role and the requirements which
would enable her nail it. Oh my days! She killed it.

The only issues I had with the movie were the many scenes that dragged for too long and the ridiculous decisions made by “Brea” and “Darren”.

Overall, TRAFFIK is that one movie I recommend with all of my heart. You shouldn’t miss out on this one.