MOVIE REVIEW: OCEAN’S 8 Wows majorly On the Strengths of Its All-star Cast 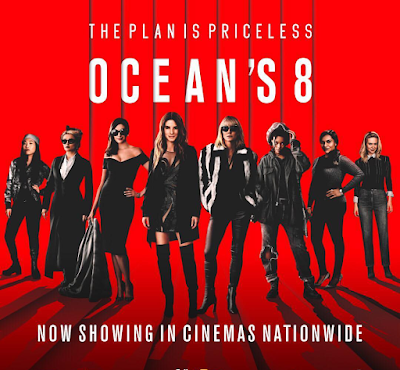 FUN is the word to describe the very energetic and mischievous octet served to us as the master thieves in a gender-reversed spin on the all-male Ocean’s 11 trilogy.

Directed by Gary Ross whose directing skills can’t be described as superb due to the epic flatness which almost makes the story numb in the middle of the film, Ocean’s 8 still makes a great watch any day!

The story is one of the reasons why I absolutely enjoyed the movie. Shall I give you a synopsis? Upon her release from prison, Debbie, the estranged sister of legendary conman, Danny Ocean, puts together a group of unstoppable crooks to pull of the heist of the century. Their goal is New York City’s annual Met Gala, and a Cartier necklace worth 150 million dollars.

Even though, the movie was awfully quiet at some point due to a few lapses from the director, I am more than delighted to inform you that Ocean’s 8 is one of the most exciting movies I have seen this year.

I was displeased by the fact that the top rated stars didn’t get enough to do in this movie. My consolation however, were the characters of Nine ball played by Rihanna, Daphne Kluger played by Anne Hathaway, and the hilarious breakout star of this film, Awkwafina.

Lest I forget, I thought Debbie Ocean’s character
played by one of my favourite actresses of all time, Sandra Bullock, could have been funnier and not so stiff.

Overall, Ocean’s 8 might not be a must watch, but it definitely is a great watch. I recommend this film with all the excitement in the world. I promise, it’s so much fun to see!