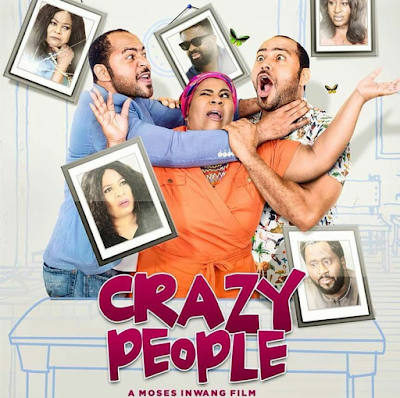 What do you say when you watch a film, which gracefully serves you a superb production, stellar cast and a top-notch story? Well, you don’t say anything. You simply doff your hat!

Produced and directed by Moses Inwang, the movie which parades A-listers such as Ramsey Nouah, Ireti Doyle, Chigul, Monalisa Chinda, and a host of others is a psychological comic thriller which sheds light on mental health issues in a funny, yet educative manner.

Did I enjoy this movie? No! It was more than enjoyment, I learnt a lot from ‘Crazy People’. The truth here is, I can’t even find faults because this was a fantastic production which paraded highly impressive acting, and the icing on the cake being a thought-provoking message.

At the end of the film, I asked myself if this really is a Nollywood production because it simply lacked the common errors associated with Nigerian films.

Even though I thought ‘Crazy People’ could have been funnier than we saw, I was particularly impressed with
the lead characters Alfred played by Ben Lugo, and Lucinda played by Chioma ‘Chigul’ Omerua. They were practically like ‘bread and butter’ and this brought out the whole essence of the movie.

I really shouldn’t give too much away; ‘Crazy People’ is simply a breath of fresh air. You should see it!