-Gists From The Colourful Event 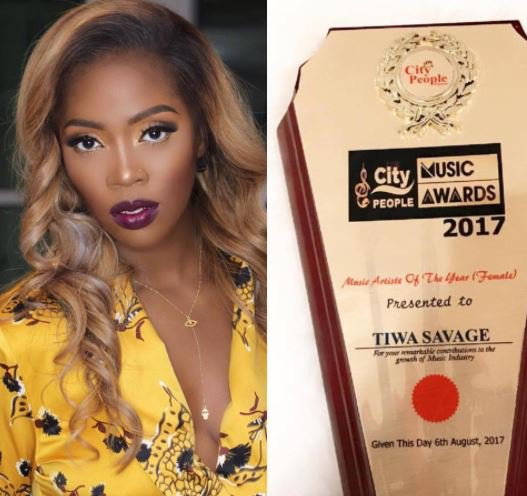 The first edition of the highly anticipated City People Music Awards held in Lagos amidst glitz and glamour on Sunday, August 6, 2017 at 10 Degrees Events Centre, Oregun, Ikeja, Lagos, and it sure was a gathering of the crème de la crème of the Nigerian entertainment industry. Your one and only Isale Eko Chick was at the event anchored by the duo of popular Nigerian rapper Rugged Man, and TVC presenter, Honey Pot, and this right here was exactly how it went down:

RUGGED MAN AND HONEYPOT HELD IT DOWN IN GRAND-STYLE 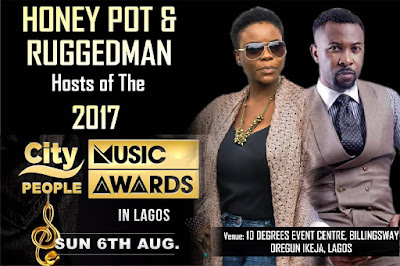 The hosts of the ceremony, Rugged Man and Honey Pot looked really good together on stage.The duo thrilled the audience as they started off, throwing banters at each other before calling on the Publisher of City People Magazine, Dr. Seye Kehinde, to give his welcome address.

The Publisher of City People Magazine, Dr. Seye Kehinde welcomed everybody to the event before noting that the music part had  been separated from the hitherto City People Entertainment Awards, which he said was to give room for more genres of music to compete for awards. He added that preparations have commenced for the movie part of the Entertainment Awards.

FIRST SET OF AWARDS PRESENTED BY BIODUN AND RADEKE KUPOLUYI

To present the first set of awards were media personality, Mr. Biodun Kupoluyi and his pretty wife, Radeke, They presented the Fuji Artiste of the Year Award, which was won by Sule Alao Malaika, Life Time Achievement Awards which went to ace broadcaster Femi Sowolu and the legendary Queen Salawa Abeni .

Queen Salawa Abeni’s hip-hop artiste son, Big Sheff, joined her on stage after she picked up her Life Time Achievement Award and together they gave a beautiful performance of her “Gentle Lady Ni Mi” song to the delight of the audience.

Big Brother Naija ex-housemates, Coco Ice, Gifty, Uriel and Bassey who were in attendance were called on stage together to receive recognition awards presented by Biodun Kupoluyi and his wife. Coco Ice performed before exiting the stage.


PRESENTATION OF SECOND SET OF AWARDS

Veteran actor, Patrick Doyle and Hon. Hadijat Oladapo were invited on stage to present the second set of awards. They presented the Special Recognition Award for the Best Long Standing Group/Duo,  which was picked up by Adex of Artquake,  Kennis Radio got Lifetime Achievement Awards for its contribution to the growth of the Nigerian music industry. Kenny Ogungbe however pointed out that the Lifetime Achievement Award was his first ever.  A Special Recognition Award went to Dotun Omotoye, and Chris Ubosi  got a Lifetime Achievement  Award. The Most Outstanding Music Institution Award went to COSON, Pillar of Music Award was given to Chief Tony Okoroji, Female On Air Personality of The Year Award was won by DJ Butter, Television Station With Best Music Content (Cable) went to AMC and the Music Legend Award went to Majek Fashek, who picked it up before giving a thrilling performance which rounded up the second set of awards. Daniella, a female hip-hop artiste, performed immediately after him.

Tiwa Savage who won the artiste of the year award was effortlessly stylish in her Bodak Yellow outfit, made by Funke Adepoju. ‘Maradona’crooner, Niniola served some major fashion goals on the red carpet. And did former Big Brother Naija housemate Uriel who is fast becoming a fashion icon on social media come to slay? She was gorgeously dressed and sure tuned a few heads!

RUKAYAT GAWAT WAS A DELIGHT TO WATCH

Popular Islamic artiste, Rukayat Gawat stormed the awards ceremony with her band and gave a remarkable performance on stage after receiving her award. She won the  Islamic Artiste of the Year Award. Gospel/Juju artiste, Lanre Teriba, better known as 'Atorise'  dished out the final performance of the night which was totally on point.

Some of the dignitaries and celebrities at the City People Magazine Music Awards 2017 include:

13.           Akiin Shuga –   Special Recognition Award for your remarkable
contributions to the growth of the Music Industry.