These 3 Hotties Are Taking Nigeria To The Winter Olympics For The First Time Ever!!! 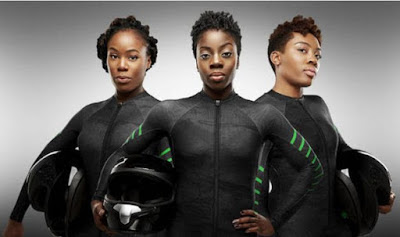 Just like the Nigerian paralympians who made us proud earlier this year by excelling beyond our expectations and shattering a bunch of world records, three other Nigerian athletes are set to make history again.

Seun Adigun, Ngozi Onwumere and Akuoma Omeoga are the three brave women who want to put Nigeria on the map by being the first representatives at the Winter Olympic Games come 2018- in Bobsled. These pretty ladies who are all based in the USA are determined to add Nigeria to that exclusive list of African countries – which include Ghana, Kenya and Zimbabwe.

According to konbini.com, Seun Adigun, who refers to the project as her ‘gift to Nigeria’, said:

The success of this bobsled team will positively affect millions of people all over the world and will represent monumental international advancements in social, athletic, and economic statuses.
Together, we can demonstrate that nothing is impossible with a little faith, support and willingness to persevere.

The three athletes have started a GoFundMe campaign to raise $150,000 (around N70 million) to create awareness around the historical feat they are set to accomplish.

The 2018 Winter Olympics, officially known as the XXIII Olympic Winter Games is a major international multi-sport event scheduled to take place from 9 to 25 February 2018, in Pyeongchang, South Korea.

Bobsled, which the trio of Seun Adigun, Ngozi Onwumere and Akuoma Omeoga will be competing in, is a winter sport in which teams of two or four teammates make timed runs down narrow, twisting, banked, iced tracks in a gravity-powered sled. The timed runs are combined to calculate the final score.
Follow on twitter Follow @BeautifulBlogga
Posted by thatisaleekochick at 5:03 pm