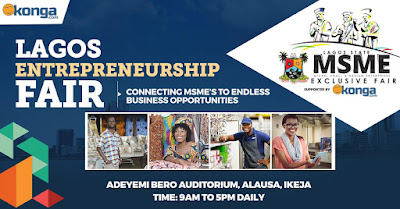 The Lagos State Government has partnered with Nigeria's largest online mall Konga.com to host the first ever Micro Small and Medium Enterprises (MSMEs) fair in Lagos for indigenous and local manufacturers and producers.

This six day fair aimed at promoting "made in Nigeria" products by MSMEs commenced on the 2nd of May and will hold till the 8th of May 2016 at the Adeyemo-Bero Auditorium, Alausa Ikeja, Lagos.

Speaking at the official opening of the fair, the Governor of Lagos State Akinwunmi Ambode, who was represented by the Deputy Governor of the State, Mrs. Oluranti Adebule, while acknowledging the importance of MSMEs to the Nigerian economy noted that with over three million
micro enterprises and over 11,000 SMEs, Lagos accounted for the largest concentration of micro and small-scale enterprises in Nigeria. He further added that in order to tackle the challenges of access to funding by small businesses, the state recently disbursed N6.25bn out of the N25bn employment trust fund established by it.

The CEO of Konga.com Shola Adekoya while expressing Konga's reason for aligning with the Lagos State government in growing and promoting MSMEs in Lagos stated that this was indeed a laudable partnership as is in line with Konga's mission to be the engine of trade and commerce in Africa by empowering indigenous MSME's to reach a much wider market across the nation through its seller platform on Konga.com.

Ogunleye concluded by  stating that aside listing exhibitors on Konga platform for market access and global visibility, this fair would also foster quality comparison and innovative improvements among participating exhibitors for local and international competitiveness.
Follow on twitter Follow @BeautifulBlogga
Posted by thatisaleekochick at 5:20 pm