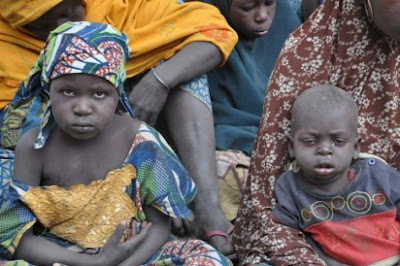 A nine-year-old girl who was among the 65 young girls rescued by the troops from Sambisa forest has embarked on hunger strike, saying she wanted to go back to Sambisa forest to meet her Boko Haram husband.

It was gathered that the girl (name withheld) has refused to eat for the past three days insisting that she wanted to go back and reunite with her Boko Haram husband in Sambisa 12 other rescued girls were also discovered to be pregnant while others
have already given birth. This was disclosed yesterday when Governor Kashim Shettima of Borno state visited the headquarters of the 7 Division, Nigerian Army, Maimalari Cantonment to officially receive the Boko Haram hostages by the General Officer Commanding (GOC), Major General Victor Ezegwu. It was also observed that most of the rescued hostages comprising 27 children and over 30 young girls with few women including two Camerounians have been indoctrinated by the sect as many of them claimed they have been with the sect for the past three years, and were willing to go back to Sambisa to meet their husbands.  Briefing Governor Shettima at the Youth centre in Maimalari Cantonment, venue of the official handing over of the hostages to the Borno State Government, the GOC said, the ongoing Operation crackdown in Sambisa forest which commenced about a week ago was recording successes as according to him, many of the insurgents have been killed by troops with the recovery of chunks of arms and ammunitions at Balaza, Walasa, Banki and other surrounding villages.  He said during the crackdown, over 300 persons held by the insurgents in Dikwa, Gamboru, Ngala, Kala Balge axis have been rescued and handed over to their families in Dikwa resettlement camp, while 300 cattle rustled by the sect have been returned to their real owners. While commending Governor Shettima and the state government for their support towards complementing effort of the military in the fight against insurgents, the GOC assured that the Nigerian Army will not rest on its oars, until Boko Haram elements are dislodged from their hideouts. Responding, Governor Shettima commended the military and other security agencies for storming the heart of Sambisa Forest, which according to him will see to the end of the insurgents deadly activities in the north east. He said, as government, he will do everything possible with the scarce resources at his disposal to support military in order to put an end the Boko Haram madness in the state.  While congratulating the rescued hostages Shettima said, the state government will keep them in a safer place to enable them undergo proper counselling and traumatic training before they reunite with their families, pointing out that the two Cameroonians who were freed alongside other Borno citizens will be taken back and handed over to the Cameroonian government. Follow on twitter Follow @BeautifulBlogga
Posted by thatisaleekochick at 5:06 pm