-Vivien Talks About Her Life 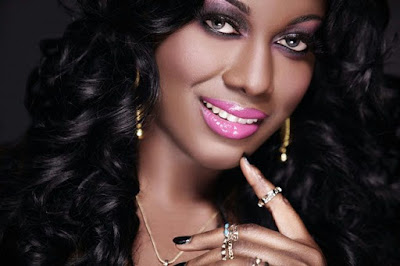 Vivien Ike is popular actress,Chika Ike's older sister who relocated to Nigeria two years ago after living in America for a long time. She currently runs a production company which is making a debut in television production with a reality show called 'Blind Tasters'. In an interview with Qismat Yinus,she speaks about her relationship with Chika,and her reality show. 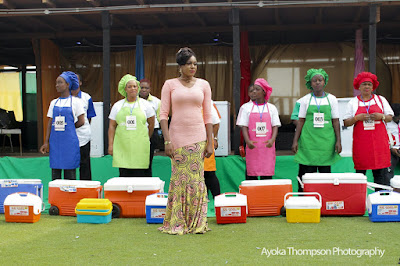 Who is Vivien Ike?

A born again Christian who knows that for her to fulfill her purpose, she has to first seek the kingdom of God and everything else will be given to her.

Tell us about your background?

I grew up in a family where family values lies in teaching the golden rule and practicing what we were taught.  That golden rule, as my mum would say is to treat others the way you would like to be treated. For me, that’s true religion. Added to that, pray without season and have faith in God.

How is your relationship with your sister Chika Ike?

We have an understanding relationship and treat each other with much love and respect.

How would you describe your sister Chika Ike?

My sister is an amazing human being. (Laughs) I asked her of a word that describes her and she thought for a second and said, “drive.”  I was like oh…ok. Now, drive means ambitious, a go-getter, someone who is determined to go that mile to get what she truly deserves. I respect that.

Some people claim you came back to Nigeria to compete with your sister,is this true?

Ouch! I did not return to compete with Chika Ike. Doing that would only make me bitter. I only returned to do what I was meant to do. So, as it stands, I look in my mirror and see my competition and that is, myself. My aim is to improve on who I was yesterday and become a better version of me.

Do you intend to continue with your acting career?

I am open to anything as long as it keeps me on the right path. I know where I am coming from and I am well aware of where I am going so whatever decision I make has to be in alignment with my purpose.

Creativity inspires me because it breaks down walls and dissolves fear. It boosts your self-esteem and soon enough you begin to see yourself as a creative genius.  Because there are no rules, you have so much liberty to express yourself and stretch your imagination. I actually believe it’s the foundation of success.

Who are your mentors?

Well, I am a perfectionist so I will go with Jesus- because he is perfect. But if you had to rephrase the question and ask me the ones I truly admire, I would not mince words when I say Steve Jobs and Oprah Winfrey. I love people that think different and also those that are cheerful givers.

Why did you leave the United States for Nigeria?

I am an intuitive person who believes that nothing is sheer coincidence. I believe the main reason why I won a US visa lottery was for me to garner the experience that I needed to do what I am doing now. So at the appointed time, my spirit was restless; I knew I had to return and that’s exactly what I did.

Blind Tasters is a healthy competition that celebrates family values, promotes the concept of love, friendship, and cooking. It employs blind tasting as a means of evaluating, promoting, strengthening and rekindling the bond between people.  This healthy competition involves seven contestants and seven blind tasters. These blind tasters could be family relations or friends of the contestants. The contestants are assigned to cook while the blind tasters are to identify their contestant’s dish. If they fail, they send their contestants to the danger zone where each of them has to identify whatever is presented to them. They do this with their eyes closed and noses clamped. Any contestant that fails the test goes into the elimination room to face a celebrity judge and two other judges. There, they are judged based on the presentation and taste of their food. The contestant with worst food is eliminated and the one that has the best food wins. The overall winner of the competition leaves with a cash prize of two million Naira and a brand new car.

How does Blind Tasters stand out among other reality shows?

Blind tasters already speaks for itself as its format has been reviewed by top production companies like Buck Productions, which is a leading content creation company honoured multiple times on Real Screen’s Global 100 list as one of the most influential, inspirational, and world leading production companies in the world, Eye Works Belgium, acquired by WarnerBro and is seemingly one of the leading independent TV and film production companies in Belgium, relatively Real, the television arm of Relativity media, that produced the hit shows MTV’S Catfish and The American Bible Challenge. Documentary Makers (NeonTV) and InTroubleZone Productions also reviewed the show.
Also Blind Tasters is a show that celebrates family values, which includes social, political, religious and work values. All these strengthen the bonds families have and help kids make good choices. I am confident that Blind Tasters will appeal to a broad demographic due to its varied content and entertainment value. For example, a mother can be the contestant and her 7 year old can be her blind taster.

In three words, Blind Tasters cooking competition is colorful, fun and rewarding! When I say Blind Tasters is rewarding, I am not just taking about financial reward but things that money cant buy like fixing broken relationships, restoring peace, trust and unity between families and friends. For me, there are two relationships that really matter,our relationship with God and your relationship with your family. As we know, some people consider friends, family. Blind Tasters has been able to attract international sponsors like Skyrun international company, and big name sponsors like Eleganza,and Tarzan Cargo services. We also had part sponsorship from the deck at Oba Elegushi beach. We are very grateful for their contributions as we look forwards to more sponsorship opportunities in the future.

How do you think this will contribute to the economy?

Creativity is important for economic growth and development. Due to this, my focus has always been to create wealth and in doing so, promote a creative economy.  Everything in this world began with a simple idea and this has created job opportunities and generated income, thereby contributing to the development of countries. Blind Tasters is no different in the sense that it is a brilliant idea that has the potential of doing the same thing,generating income and creating job opportunities, which in essence will promote a creative economy and maximize developmental gains in this ever changing world of ours.

What are your long-term goals?

By his grace, my production company, Vivienike productions limited, will produce more shows, movies, documentaries and more in the future. My team and I strongly believe that greatness lives here and we are determined to prove it.