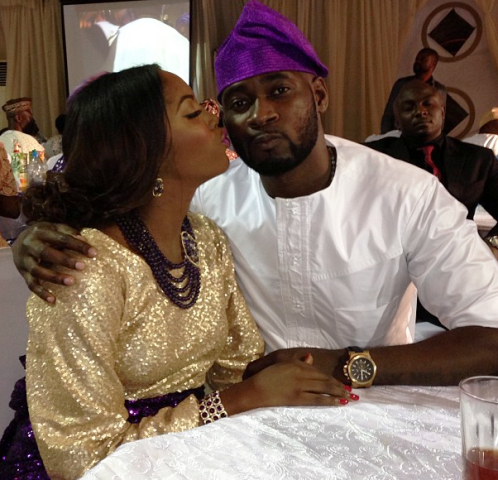 This right here is according to misspetitenigeria

Tiwa and Teebillz do have issues but it's not related to cheating or beating her as speculated by some. It's money issues . Teebillz is reportedly dipping his hands into her funds. I say reportedly because though I'm 99.9% sure of my source,there is still. 1% left to chance.

According to a Miss Petite source, Teebillz has not been accountable as regards the actual performance fees he receives on her behalf. As her husband /manager and also boss of her record label 323 entertainment,Tiwa left all negotiations to him. He would tell her he collected a certain amount and because she trusts him,she doesn't bother to verify. So he has been ripping her off for a while.

My source mentioned an incident with Hiptv boss Ayo Animashaun.He agreed to pay them N2m for the live coverage of their dubai wedding. He then paid Teebillz about N1.5m and Teebillz didn't tell Tiwa he collected the money.

A while after the wedding, a furious Tiwa called Ayo, raising dust and raining insults on him for not paying them. He had to prove to her he paid Teebillz after she had sworn she trusted him, he couldn't lie to her .

She was embarrassed when she found out her husband had collected the money without her knowledge. It took the intervention of the current NFF chairman, to settle the issue and appease the aggrieved Hiptv Boss.

That is just one instance. But she had recently found out he had been doing that regarding so many other shows. She was hurt and betrayed hence his replacement with another manager, Meccamillions..

Tiwa had openly said Teebillz believed in her when no one did.She said he sponsored her first video,Kele Kele . She even reportedly gives her her credit card ..

Despite their show of solidarity,they are still not in good terms and Tiwa may need some time to get over the betrayal. We all know it means she may find it hard trusting him with her business anymore.

Already, her new manager accompanies her to events and before you interview her, you have to go through him.

Sometimes, Love/family and business isn't a good mix. Beyonce and her father are a perfect example.