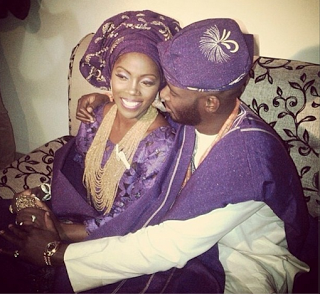 This report is according to ynaija.com

Yesterday, we exclusively confirmed that Tiwa Savage and TeeBillz are on a rocky path in their relationship (due to domestic violence and cheating allegations), well, it has gotten uglier.
Hours after we unveiled details of her new manager, Meka Millions, our source confirmed that Tiwa Savage has moved out of the house.
“It’s like she’s decided to
stay with a friend or something… but she has left the house as we speak, she left yesterday afternoon and has not returned… No, she didn’t go for a show,” our source exclusively told us.

When asked how Tunji is faring, the source said, “What will he do? He caused the whole thing now. Tunji is a randy guy… it’s family members that are trying to salvage the situation now. He really hurt her this time.”
This is not the first time a celebrity couple is finding it hard to keep their marriage intact due to constant media checks and scrutiny.
Tiwa and TeeBillz began their love affair over two years ago but kept it under wraps and even denied it on the pages of newspapers and magazine until Wednesday, February, 5, 2013, when TeeBillz engaged Tiwa with a $2,000 diamond-encrusted, yellow canary wedding band.
The pair held a traditional marriage in November 2013 and a white wedding in Dubai, UAE, in April 2014.
TeeBillz has two children from a previous relationship in the US, and it has been said, but not confirmed, that that relationship ended because of domestic violence on his part.
Follow on twitter Follow @BeautifulBlogga
Posted by thatisaleekochick at 1:42 pm