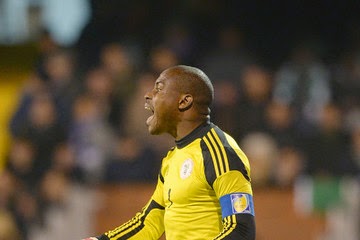 Vincent Enyeama has been rated Africa’s best player at the ongoing  2014 World Cup in Brazil with 9.59 points in the latest Castrol Index Top 10 rankings released by the World football governing body, FIFA.
His last minute save to deny Edin Dzeko a sure goal as Nigeria beat Bosnia-Herzegovina 1-0 in a Group F game on Sunday is probably his finest moment so far in Brazil.
According to SuperSport, The 31-year-old is currently ranked as the best of all shot-stoppers currently in Brazil by FIFA.
Only Karim Benzema (9.77), Robin Van Persie (9.72), Arjen Robben (9.67) and David Luiz (9.63) have amassed more ranking points than the Nigerian shot-stopper.