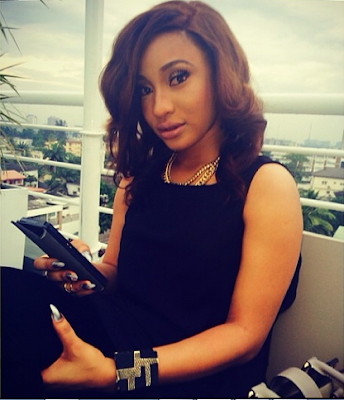 Lol!This is according to Emmy Collins.


If you guys think I`m bad, then wait until our new writer settles in. The fun is just beginning.
Please read and enjoy his new article below.
I had fun reading it and I hope you will too.
EC

2013 was a very eventful year for us here. We saw the worst of the worst all in the name of “celebrity”! We saw popular people with no talent become more popular, we saw people with no style at all torture our eyes on every red carpet.

This list names 8 people who tormented us in 2013, and whom we really wish they could
” make it stop”. So these people are what I would like to call, the train wrecks of the year:

From her crappy music, to her even crappier acting, down to her tacky style choices, this council member of the bleachers inc is certainly a train wreck.
Fighting on Twitter, dissing other “celebs” on social media, showing off knock offs on instagram down to the NDLEA weed episode, there is no stopping Tonto.
Girl loves attention, and will do anything to get it. If only she can devote this amount of passion to bettering her craft.


What Davido lacks in talent, he makes up with a HUGE ego.
This noise maker is a product of a massive PR machine, oiled by (as we hear) family money. The spoilt brat flights at clubs, spews rubbish during interviews, and is always ready to cuss out anyone who doesn’t agree with him.
In a country where you can become a “celeb” with half baked talent, Davido certainly reigns supreme.

If Muna would get off fighting with anyone who describes her lack of talent on Twitter, maybe, just maybe she would have one hit song.
This former MGBN who describes herself as a rapper (rolls eyes) is certainly a very pretty girl, but it appears that is all there is to her.
Her personal style also hasn’t improved. Winning MGBN is a great launch pad, so I suggest that she figures out what it is that she is good at, because rapping (rolls eyes again) is definitely not one of them.

We woke up one morning and Toyin lawani was everywhere.
This stylist (her words not mine) and chairperson of the Bleachers INC is clearly the joke of the year. She's currently pregnant, so I will try to be nice (lol).
She should however go easy on the bleaching, and we are so tired of seeing her knock offs on Instagram. Someone told me that she is a fashion designer also (scoffs). Ms lawani is not about to stop.

I cringe whenever someone refers to Cossy as a Nollywood actress.
So showing off humoungous boobs and a flabby body in the most rachet way possible qualifies her as an actress? Shame!!
Cossy has no talent whatsoever, I would have suggested she moved to Las Vegas to be in a burlesque show, but her flabby body won’t quite cut it. So the big question remains “what is it that Cossy does”?

This “I am getting old, but I must be talked about” woman is hilarious joke.
She is described as a producer/director of soft porn movies, which she often features in. She is often on social media, sharing her opinion on everything. Somebody described her as Nigeria’s Anna Nicole Smith and I nearly fell off the chair laughing.
Dear Afrocandy, you are getting older, just accept it! Being ratchet won’t reverse the clock.
I certainly don’t know how to classify this woman. I am not quite sure what she does, besides showing off her “vijayjay” on Instagram and there seems to be no stopping her.
Not even Instagram themselves who suspended her account, can stop her as she is back and stronger! Lol! We have no words!!
I am not big on Nollywood, but I hear that Uche Jumbo’s acting has improved.
I also hear that she has become a film maker, which is good too. However she is on this list because of her style or lack of it.
Her marriage to an American eye candy hasn’t improved her horror style. Her horror highlight was at the AMVCA nominees party where I could have sworn that she was attacked by a pack of wolves just before she got in the red carpet.
Girlfriend needs a stylist like yesterday. Well let’s hope they make it stop in the new year.
Xoxo
Diary By Emmy