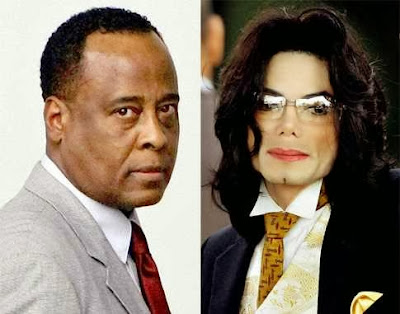 
“You want to know how close Michael and I were? I held his penis every night. I had to put a condom cathether on him because Michael dripped urine. He had a loss of sensation and was incontinent. Michael didn’t know how to put a condom on, so I had to do it for him. It was the most intimate thing but he trusted me.I didn’t kill Michael Jackson.  He was a drug addict,“Michael Jackson accidentally killed Michael Jackson.I believe he woke up, got hold of his own stash of Propofol and injected himself.  He did it too quickly and went into cardiac arrest.....
He was in crisis at the end of his life, filled with panic and misery ... By the end, MichaelJackson was a broken man. I tried to protect him but instead I was brought down with him.

Jackson had been dragged “into the abyss” of physical and mental anguish by the pressures of his London tour,He was so unhinged in his final days that he didn’t allow his underwear to be cleaned because he feared the maids would sell it.“He also had a hip condition where the hip bone comes out of the socket.  Michael wanted to know if I could arrange a hip replacement.None of them are Michael’s biological children.  He chose friends or business colleagues to help him.Michael was a decrepit man,He wanted to “be cremated and scattered someone nice and warm” yet his family ended up burying him in a Los Angeles cemetery.


Y'all remember this Doctor?
He was convicted of involuntary manslaughter of Michael Jackson!
Dis man get mind o!