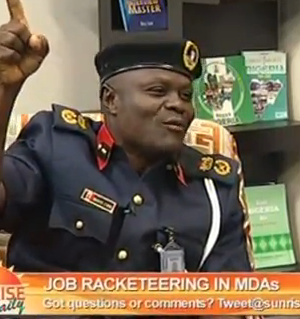 Lol! This man is a funny man.See his exclusive interview with Theheraldng below:

I have nothing much to say other than to bless God for everything. I thank God for all that happened; I thank God for my boss, his support and love. He is a good boss and I appreciate him. As far as I am concerned all things work well for those who love God and in all things, the Bible says we should praise God.  The people that thought they were going to ruin me did not know that they would end up in announcing my destiny.
In the history of humanity, there had never been any human being that had instant fame like I did especially in a case that was meant to end negatively.

My brother-in-law in London is even so excited about the incident that he promised to assist me make big money out of this supposed mess. He had already handed the matter to an agency over there to trade mark “Oga at the Top.” But I just asked him to forget it.
There is no need for that.
Many of my class mates are in top positions in Nigeria currently, yet, they said I did not go to school. I can mention a lot of them here, including the Attorney General in Lagos State, Ipaye.
But why should I do all that. All the same, I give all the praises to God.

It was not the first interview I would be having with them (Channels Tv). After that interview we shook hands and I even gave them my complimentary card. I could see that they were not really cheerful. If there was any effect, it was on them and not me. It was the same day I met with Governor Fashola of Lagos State.

Theirs took place in the morning and I met Governor Fashola later in the day. Some people believed they were up to something, but I did not know. I was only being careful with words as a security officer. We apply caution in all that we say and do. It was a live programme, the whole world was watching us, so, I did not want to be too free.

But like I said, I thank God for everything. I blame nobody for anything; I see everything as an act of God. They believe they would use it to destroy my destiny but God turned everything around for me, for the better.
The day of the interview, 16th of March, 2013, was the day my father was buried. It was as if it was designed to destablise me on the day of the burial of my father, but it was not so. It was three or four days after that they apologised and said it was not meant to embarrass me.

Channels felt bad because it backfired. Anybody that wants to go for an interview in Channels will be very skeptical now and henceforth. I just felt it was my time for divine announcement, so I did not take it the way they thought I would take it.

In fact, when I saw the T-shirt, I wanted to buy one. Some had thought that my transfer to Ibadan was a demotion, but they are wrong. It is not. They also claimed that my wife went to Channels over the issue. The question I asked was, to do what? She did not. The whole thing has only turned around to be God’s glory in my life.
My philosophy of life is to impact positively on this generation. I want to leave a legacy, a good and worthwhile legacy behind that will not make my family live or walk in fear when I am gone. I want to sustain my good name; and that is what I preach to my staff every day.
I tell them to be open-minded; be determined; do what you will do with your best ability whether people are there or not. Note that there are people watching you and your work will speak for you when you are not there. This is what I always tell them.
Everyone should identify a lesson out of the whole saga. Follow on twitter Follow @BeautifulBlogga
Posted by thatisaleekochick at 10:48 am