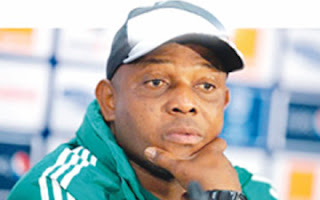 The Nigeria Football Federation (NFF) has decided to slash the salaries of National team coaches including Stephen Keshi who still has a contract running.The Technical and Development Committee of the federation which met on Tuesday in Abuja recommended steps needed to be taken to reduce the overhead cost in the administration of football in the country.
The Punch newspapers reports it thus:


The General Secretary of the NFF, Mr. Musa Amadu, told our correspondent on Tuesday that the federation was simply facing the reality on ground.
He said, “If you take just a simple look at the period around June and the cost implication for the country, for instance, you will understand that the measures being taken have become very necessary. We cannot continue like this; there has to be sensible auditing.”
The NFF added that based on the poor financial situation, the committee has also recommended the staff auditing of the technical crew and backroom staff of all the national teams. This move will see the national team coaches being cut down to maximum of two assistants and a goalkeeper trainer. The Eagles have three assistant coaches plus a goalkeeper trainer. The other backroom staffers are to be cut down too.

The players’ win bonus was not spared in the proposed slash as the $10,000 bonus for players will be reduced by half.
The Punch report continues below:


The players themselves were not spared in the latest decision. Their win bonus, which was raised to $10,000 some years ago has been cut down to $5,000. The bonus became an issue after the Africa Cup of Nations in South Africa as the NFF could not pay the final game bonus after it was nearly doubled from the pre-tournament rate.
“The Committee regrets the financial situation that has also necessitated the pegging of bonuses, review of allowances and salaries of coaches of the national teams,” the committee communiqué read.
The committee also deliberated on the war of words between Keshi and his players and assured that peace would reign before the country embarks on the series of matches for the 2014 FIFA World Cup qualifiers, as well as the 2013 FIFA Confederations Cup.